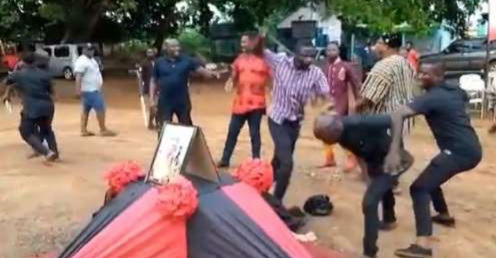 There is no doubt that the violent incident which happened on Saturday, August 28, 2021 at Suhum in the Eastern Region between supporters of the ruling New Patriotic Party (NPP) has brought lots of shame to the party.

Even though earlier media report has it that the violent incident occurred between supporters of the Vice President, Dr. Mahammudu Bawumia and Mr. John Alan Kyeremanten.

However, both sides have come out openly to denied that neither of them nor their supporters were involvement in that infamous act.

After the denial by the two prominent members of the NPP, the Eastern Regional Communicators of the ruling NPP have turned their guns against the sitting Member of Parliament (MP) for Suhum Constituency, Mr Boafo Kwadjo Asante as the one behind the dastardly act.

According to them, they are disappointed in the MP for looking on unconcerned when their colleague was attacked and injured.

They are demanding unqualified apology from the MP for allowing the violent incident to occur.

Touching on what really transpired on that Saturday, August 28, 2021 fracas in a statement issued by the communicators, the communicators explained that they requested to join the entourage of the MP to express pleasantries to the bereaved family when they attended the funeral of the late father of their colleague.

“After informing the PA of the MP of Suhum Constituency of our decision, we were clearly informed that the MP does not recognise any of us as members; hence we cannot join his entourage in exchanging of pleasantries to our dear brother,” the statement disclosed.

They therefore asked their spokesperson to go and seek permission for them to leave the funeral grounds for equally important engagement, “upon seeking permission, our spokesperson expressed our deepest displeasure and dismay by the position of the Suhum MP and his team to disrespect hardworking grassroot communicators of the dear party in that denigrating manner.

“In the process of reiterating our displeasure, disappointment and resentment on the position of the MP, our spokesperson was forcibly attacked by a mob of supporters of the MP who manhandled in uncharitable manner.”

They continued that the aggrieved attackers turned their attention on them when they attempted to rescue their spokesperson as the driver of the MP allegedly pulled a machete from the vehicle of the MP and slashed the forehead of a member of the grassroots communicators, Bernard Akwasi Amoani.

The communicators therefore expressed their disappointment in the MP for masterminding the attack on them and not visiting them after the incident as well as failing to calm tempers during the incident among others.

“We therefore use this opportunity to inform the party hierarchy and the general public of our decision to indefinite suspend our communication on matters involving the MP in both traditional and print media until formal apology from the MP,” the communicators stated.

However, the MP in a statement issued yesterday August 30, 2021 has denied that his personal driver was involved in the incident after unreservedly condemning the entire incident.

He further stated that no dangerous implement such as cutlass was picked from his car to cause harm during the brawl.

The MP also sympathised with anyone who has been affected by the incident and wished the injured persons speedy recovery.

Mr Kwadjo Asante therefore called on his constituents to remain calm as he asked the police to expedite action in investigating the case and pledged to cooperate and support in resolving the matter.