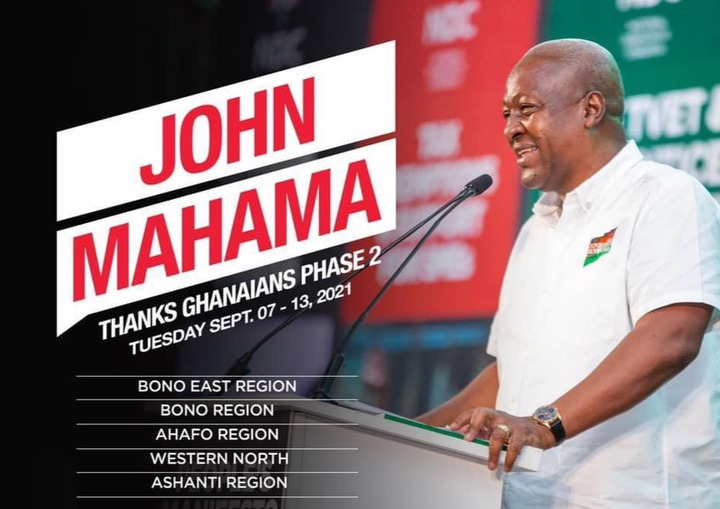 The 2020 Presidential Candidate of the National Democratic Congress (NDC), Former President John Dramani Mahama, today began the second phase of his nationwide tour to thank Ghanaians for their immense support and votes in the December 2020 elections.

This phase of the tour according to his handlers will take him to the Bono East, Bono, Ahafo, Western North and Ashanti Regions of the country.

Former President Mahama is billed to meet with some religious and traditional leaders. Mr. Mahama will also engage members, supporters and sympathizers of the NDC and also interact with the media.

Joining him on the tour are his Running Mate, Professor Naana Jane Opoku Agyemang, former Chief of Staff Julius Debrah, National, Regional and Constituency Executives of the NDC, and some former appointees.

The first phase of the tour took Mr Mahama and his Running Mate to the five regions in the north of the country.

Unlike the previous thank you tours witnessed where the 2020 Presidential Candidate of the NDC in the past tours all constituencies, District, Municipal and regional capitals, the 2021 tour will cover only regional capitals.

A member of the communications team in an interview with this reporter, explained that even though the 2020 Presidential Candidate of the largest opposition party has been delayed, it’s better to be late than never.

He attributed the delay to the Supreme Court petition the party under took to challenged the outcome of the 2020 General elections.

Meanwhile, the various regional Chairpersons of the NDC and their executives say all is set for the successful tour by the 2020 Presidential Candidate of the party and his entourage.

They however, calling on their numerous supporters, sympathisers, former political appointees to come out in their numbers to welcome their hero and the presidential candidate for the December 7, 2020 general elections.

JM maintains NDC were clearly robbed off victory during 2020 General Elections... Despite his admission party went to SC to calm tempers