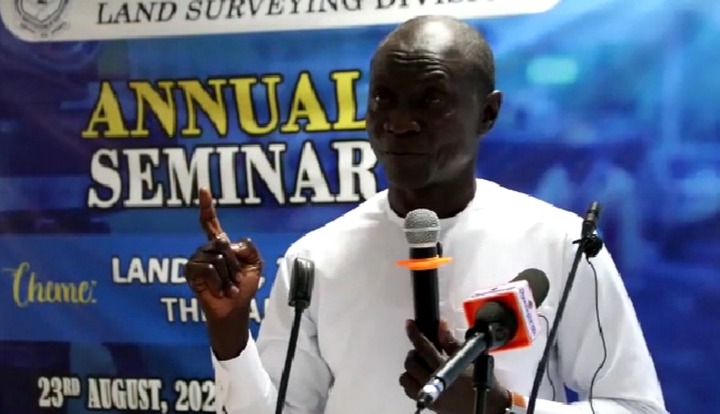 A Senior Lecturer at the University of Ghana, Faculty of Law and a consultant to the Ministry of Lands and Forestry, Lawyer Kwame Gyan has Schooled members of the Land Survey Division of the Ghana Institution of Surveyors (GHIS) on land Act 2020 (Act 1036).

Lawyer Gyan took members through the provisions of the newly passed land Act 2020 (Act 1036) which seeks to address torny land issues in the country.

According to him the new law has made sufficient provisions for women to own a piece of land without the assistant or a man representation at the time of acquiring.

Touching on discrimination against women, Lawyer Gyan revealed that Article 17 of the Constitution frowns against such act.

“Even though Article 17 of the 1992 Republican Constitution prohibits discrimination on the part of gender, greed, religion and political affiliation, women were being denied owing land which was a clear violation of their right.” He said.

Lawyer Gyan however, revealed that following some checks, women were not allowed to own land in their own right adding that they were expected to have men as counterparts while dealing in such issues.

He mentioned that another innovation which had found itself in the statute was the customary land secretariat stressing that it has been institutionalized.

He charged all Traditional Owners to have their customary land secretariat established.

Meanwhile, the Chairperson for the Land Surveying Division, Mr Christian Acquah has indicated that, the GHIS is working closely with the Attorney Generals to close pages on the survey council bill to be sent to parliament for consideration and passage.

According to Chairman Acquah, the Survey Council Bill which has been delay for some reasons when passed will harness the illegal activities of surveyors, deal with the code of conduct of the profession and also spell out the sanctions regeme.

He said “The Surveying Council Bill has been on the drawing board for a very long time but we have not left it, we are still pursuing it”

He stressed that for the bill to be relevant, the division needs land owners and government to join forces to ensure that it is passed into law.

The Land Surveying Division, Chairman said “Previously, it was Ministry of Works and Housing which was dealing with it later they said our Ministry is Lands and Forestry but now both Ministries have task to put their heads together to ensure that the bill is passed”

He hinted that as it stands the two Ministries are working tirelessly to ensure that Land Surveyors in the country have peace of mind to carry out their day to day activities.

Akufo-Addo breaks silence on delay in appointment of MMDCEs